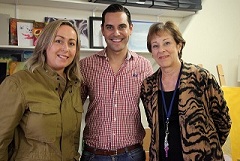 Last week I visited the inspiring Lou’s Place in Potts Point, a drop-in centre for women in crisis that was established in 1999. Over fifty volunteers help provide a safe place for women at risk. More information on Lou’s Place can be found HERE and I will soon speak in Parliament about the vital work they do.

The Minister for Transport has agreed to attend Lord Mayor Clover Moore’s forum to inform the community about the proposed South East Light Rail. I’ve been calling for consultation since the project was announced in November, and urge concerned residents to use this opportunity to be informed and ask questions. The forum is 6.30-8pm at The Great Hall, Sydney Boys High School on Monday 15 April. See the last week’s Central article HERE.

When the Government re-introduced duck hunting to get Shooters and Fishers Party support for ports privatisation, it promised ducks would only be shot to protect crops. Yet its laws allow killing Pink-eared ducks, which don’t eat crops and eat the pests that farmers control with pesticides. With no agricultural argument to support shooting a Pink-eared Duck, I introduced the Game and Feral Animal Control Amendment (Pink-eared Duck) Bill to remove it from the list of ducks that can be shot. My speech is HERE.

The State Government has been determined to remove the Rainbow Crossing from Taylor Square, citing alleged safety concerns. If they were serious about safety, the Oxford Street speed limit would be 40kph and they would be planning light rail to remove noisy buses from the kerb land and allow on-street parking to help revitalise the small business environment – as I’ve been pushing. I raised this in an interview with ABC Radio National that you can listen HERE and my opinion piece in today’s Daily Telegraph can be found HERE.

PS. On Thursday Australian environment ministers will meet to make a final decision on a national container deposit scheme. Send a message to the NSW Minister for the Environment in support of a national bottle and can recycling scheme at www.boomerangalliance.org.au