Firstly I’d like to acknowledge the Gadigal people of the Eora nation, the traditional custodians of this land.

I commend you all for coming tonight. 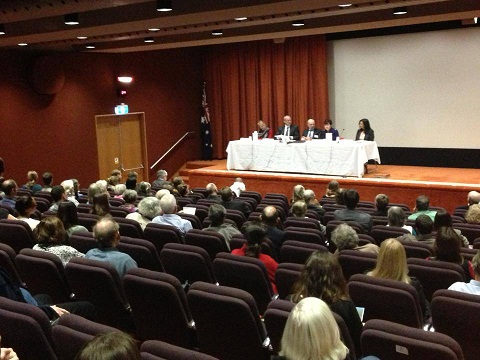 Elections are a good time to get commitments from our leaders for the benefit of present and future generations. And what better topic for this is there than national parks!

National parks are set aside to ensure the long term protection of our diminishing biodiversity. They preserve native flora, fauna and ecosystems. They provide peace, quiet, fresh air, visual beauty and the opportunity to learn about nature and to bushwalk.

Sydneysiders are the biggest users of state national parks and I know that many of my constituents regularly visit them. In fact hunting in national parks was one of the most common concerns raised with me by inner city residents when I was campaigning for the State seat of Sydney.

National parks have been increasingly under pressure. We’ve seen them opened up to horse riding, tourist development and soon hunting, and there is a moratorium on marine parks. Alarmingly a recent upper House inquiry recommended opening national parks to timber logging and imposing a moratorium on new parks.

I will vote against any proposal for logging in national parks and any legislation that prevents their expansion.

Without national parks we risk losing native species and ecosystems forever. This is a bad long term outcome for our environment and future generations.

While it all seems doom and gloom it is worth pointing out some of the recent wins to national parks. Almost 3,900 hectares of the Berowra Valley Regional Park were updated to national park status in 2011 and last year the Dharawal National Park was created. These were thanks to the hard work of many people in the room including staff from both the National Parks Association, The Minister and the environment department.

Although hunting in national parks will go ahead, it will start on a trial basis in 12 parks at this stage, and the Game Council of NSW has been abolished.

Hunting in national parks received massive press coverage and is opposed by Labor, the Greens and the two sitting independents – including me, as well as my predecessor Clover Moore. I would not be surprised if more than half of Coalition MPs opposed it, but are prevented from doing so openly.

I acknowledge the presence of the Minister on the panel. Her attendance tonight shows she is willing to listen. While the forum is about the federal election, national parks are currently a state responsibility and I am sure she will be able to take concerns on board.

I would also like to stress the role independents can play. Independents can put pressure on a Government and demonstrate community support for an issue beyond party lines.

I have asked questions in Parliament about national parks including on horse riding, river red gum thinning trials, the National Parks Establishment Plan and hunting.

My Pink-eared Duck Bill would have removed the pink-eared duck from the list of ducks that can be shot by recreational hunters on farms. When the Government re-introduced duck hunting it promised ducks would only be shot to protect crops, but the pink-eared duck does not eat crops but eats the pests that farmers control with pesticides. I worked on the bill with staff from the National Parks Association, who provided me with the scientific evidence to support the bill. It was unfortunately defeated.

In Parliament I submitted the National Parks Association’s petition signed by over 10,000 New South Wales residents opposing hunting in national parks and next Thursday the House will debate the petition. I hope you will all be present in the gallery for it.

The conservation of our natural environment through national parks is essential to our future and I hope the federal election will result in commitments – followed by delivery – for increased protections.